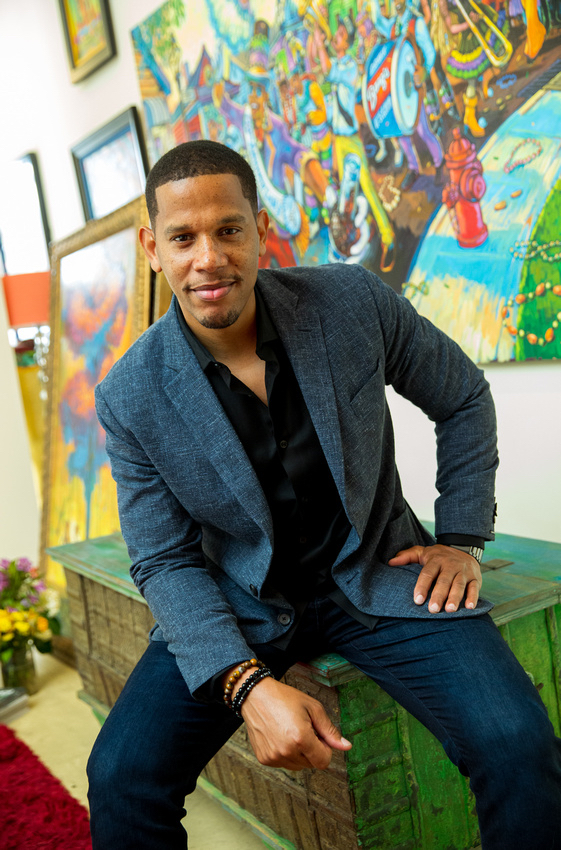 Terrance Osborne, a native New Orleanian, grew up in the heart of his culturally rich city being inspired by his diverse and colorful social surroundings. Osborne always held an undercurrent interest in art, largely fueled by his mother and his older brother. While in high school, under the guidance of artist Richard Thomas, Osborne was able to paint with the passion and expression that he had been so avid about.

Osborne attended the prestigious New Orleans Center for Creative Arts (N.O.C.C.A.) and later graduated with a degree in Fine Arts from Xavier University in New Orleans. For the following five years he taught art at Alice Harte Elementary until Hurricane Katrina devastated New Orleans and he relocated his family to Georgia. From then on, with his wife Stephanie running the business end of his art career, Osborne decided to dedicate his time completely to art. After two years in Georgia, he moved his family back to New Orleans and because of his new works, depicting scenes of a colorful New Orleans saturated by Hurricane Katrina imagery, his work quickly became international recognized. Over the years Osborne would be been featured in a slew of public media for his vivid and delightfully dynamic works glorifying New Orleans culture. “New Orleans is one of those places in the world that everyone loves because our people love people.”
His 2007, 2010, 2012, 2014 and 2018 Official Jazz & Heritage Festival Posters are a handful of the most collected posters in the world. 2006 Osborne gained partnerships with Nike to design a poster and the first New Orleans Air Force 1 tennis shoe. Osborne’s partnerships continued over the years with companies like NBA, CocaCola, Heineken and Coup De Fondré Winery.
In 2017 he officially opened Terrance Osborne Gallery in uptown New Orleans. His gallery remains one of the top galleries in the city. Be it art connoisseur or causal collector, Terrance Osborne’s art continues a delight the eyes cross all divides.